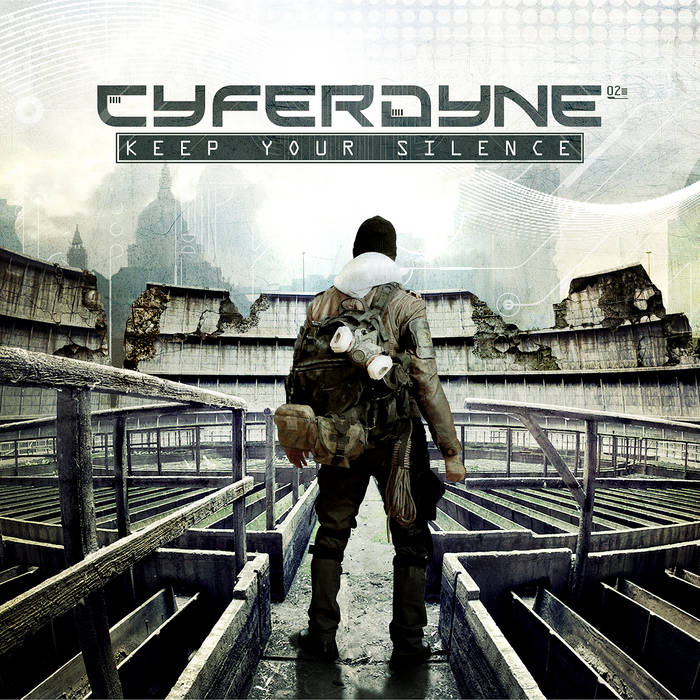 The Advantage I can't enough of CYFERDYNE, the first album was great and the latest album only builds on what they started. More refined and polished this album speaks volumes for how far the band has come! Maybe one day we will see them grace North America.Until then Keep the Beats coming! Favorite track: Jigsaw.

The smooth, assured sounds of this British trio’s second album “Keep Your Silence” saw the original release rise as high as #6 in the Deutsche Alternative Charts last year – as the band moved into leaner, cleaner and more polished production territory. “Keep Your Silence” demonstrates a quintessentially British sound reminiscent in parts of MESH or DEPECHE MODE on tracks like “Numb” and “Weak”, not merely in terms of vocals but also the plaintive synthpop melodies.

Capped by a captivating performance at Resistanz Festival and followed by a huge promotional campaign of release parties across both sides of the Atlantic, “Keep Your Silence” subsequently spawned the singles “Jigsaw” and “Numb” – the remixes from which are now compiled alongside another 9 all-new and previously unreleased remixes from PANIC LIFT, TERROLOKAUST, GINGER SNAP5, CYGNOSIC, SERAPHIM SYSTEM, C-LEKKTOR, DIE SEKTOR, RETROGRAMME and PETROL BASTARD to create the 2CD Limited Edition.

Packaged as per DWA’s other recent 2CD reissues in jewelcase with a 12-panel foldout poster/lyric insert, carton overcase and traycard hand-numbered on the inside, painstakingly visually-remixed from Vlad McNeally's original designs “Keep Your Silence (2CD Limited Edition)” is the definitive collector’s edition version of this album – strictly limited to 100 copies worldwide.

Already have the album, just want the new stuff? We hear you – check out the standalone digital release of CD2 “Break Your Silence”, which takes the 12 remixes from the CD and adds the 3 from the original digipak release to make a 15-track monster which boasts 10 tracks never previously available to download…

2013 saw a sea-change at CYFERDYNE with the departure of previous programmer, producer and co-vocalist Niall Robertson and the recruitment of local Lancaster-based Ritual Noise DJ Andy McBain in his place.
Any doubts anyone might harbor about how this might impact on CYFERDYNE’s sound should be swiftly and firmly laid to rest by the assured and powerful production of their exceptional second album “Keep Your Silence”.
Written by the original line-up including Niall, and recorded and produced by the new line-up, “Keep Your Silence” demonstrates the depth of development in both sound and songwriting one would expect from a second album, straddling the line between satisfying fans of the band’s debut “Genesys” and those seeking something more.

And “more” it certainly is, in all respects - taking CYFERDYNE into leaner, cleaner and more polished production territory. More commercially-accessible, while still retaining measures of the edge and aggression evident in their earlier material.
In the more minimal arrangements of “Keep Your Silence” Steven Houghton’s voice has never sounded more vulnerable nor so authoritative now that he is singing solo.

Catchy club classics like album-openers “Cables And Codes” (the single exception to the GARY NUMAN-esque one-word titles of the rest of the tracklist) and “Jigsaw” with its nods to DETROIT DIESEL here rub shoulders with the radio-friendly “Numb”, the perfect-pop of “Fracture” and the epic “Clockwork” – which embraces sonic elements of NINE INCH NAILS and displays CYFERDYNE’s rockier side, also represented in tracks like “Glass” and "Escape"…
More melodic and melancholic than “Genesys”, “Keep Your Silence” has an accomplished and assured feel that belies its status as the sophomore outing of a young band still creating a signature sound.

With futuristic post-apocalyptic artwork like “Genesys” by DWA’s lead designer Vlad McNeally, mastering for “Keep Your Silence” was carried out by million-selling dance music producer Jesse Skeens – who numbers the likes of JASON NEVINS and SPOOKY among his extensive client list - at his Medway Studios facility in London.

And for those of you still favouring the feel of physical product over the ephemeral nature of a download, the CD-version of “Keep Your Silence” comes with 3 bonus tracks – remixes from no less than ASSEMBLAGE 23, AESTHETIC PERFECTION and a brutal beatdown from PHOSGORE.

Bandcamp Daily  your guide to the world of Bandcamp

Interviews With Butcher Brown and Slauson Malone, plus LP of the week by SAULT.